What are the Best Festool Domino Alternatives

The Festool Domino is, without a doubt, one of the most significant tool innovations in the last few decades. It is a tool that, even with its 1,000+ dollar price tag, is well worth the money if you’re a woodworker building furniture, cabinets, etc.

Anyone who wants to speed up the joinery process can dramatically improve their workflow with a Domino joiner.

Unfortunately, the price tag can deter many woodworkers, especially hobbyists who may only build a couple of items a year. And finding a used or refurbished Domino for much cheaper than a new model is just about impossible.

What is a Festool Domino?

For those not in the know, a Domino is a machine produced by Festool that quickly (and I mean quickly!) cuts mortises into the wood. The pieces are then joined together using floating tenons (dominos).

This takes all the work out of hand or machine cutting mortises with a drill, mortising machine, router, or chisels. Since it uses floating tenons, this means you cut mortises in both pieces, so there are no worries about trying to fit the mortise to the tenon or setting up different machines or jigs for cutting each on their own.

The Domino comes in two different sizes and price points.

The primary difference between the two models is the size of mortises that the machine can cut. On the smaller Domino, you can cut mortises between 4mm to 10mm wide and 20mm to 50mm deep. This size is great for smaller projects like boxes, frames, etc. Any project that won’t have to hold a lot of weight or will be under repeated stress.

The larger Domino cuts mortises between 8mm to 14mm wide and 80mm to 140mm deep. The Domino XL weighs about 5lbs more than its smaller sibling, as the extra heft is needed to support the larger mortising action. This Domino is great for larger projects like tables, chairs, beds, etc.

Now that we’ve covered what precisely the Domino does, we can look at some alternatives just in case a new $1,000+ tool isn’t in the budget. 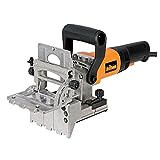 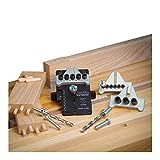 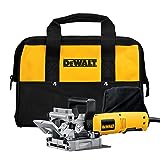 Our Top Choices for the Best Domino Alternatives

I was torn on whether to go with the tool that best matched the mechanics of the Domino with the Triton Doweling Tool or the tool that gave the best results, which was the Jessem Doweling Jig.

Ultimately, the results won out, and I went with Jessem. Joints created with the Jessem are solid and, when used properly, result in perfect transitions between the pieces.

The Jessem Doweling Jig works by allowing you to drill out perfectly centered holes in the end or sides of your board. Corresponding holes are then drilled in the other workpiece, and they can be joined together with dowels ranging from 1/4″ to 1/2″ in diameter.

The jig can be set to multiple dowel hole configurations, which significantly increases the strength of the joint. It can also be used on various stock sizes from 1/2″ to 7″, which is incredibly versatile.

How the Jessem Doweling Jig Compares to the Festool Domino

The Jessem Doweling Jig could be considered the manual alternative to the Domino. Even though the Jessem uses dowels and the Domino uses floating tenons, both result in strong joinery and nice fitting joints.

The Domino certainly has more capabilities and will be faster on larger pieces that require several dowels or dominos.

One significant shortfall with the Jessem is that it doesn’t work well on angles other than 90 degrees, whereas the domino can be used on joints anywhere from 0 degrees to 90 degrees.

If you’re looking for a doweling jig for frequent use on 45 degree mitered joints, then I’d take a look at the Dowelmax. The only reason I have the Jessem above the Dowelmax (they are essentially the same tool, and both are very high quality) is that the Dowelmax has been almost impossible to find over the past year.

The Jessem Doweling Jig is a very well-made tool capable of creating joinery on par with the Festool Domino, and I would highly recommend it or the Dowelmax.

While the Triton Doweling Joiner wins on ease of use, it also proves to be an example of getting what you pay for with a sub $250 tool versus the $1,000+ Domino.

The Triton works similarly to the Domino in that you set the depth, line up the tool, and pull a trigger to cut the joinery holes. It includes several features, including a 0 to 90-degree angle adjustment range, a dust collection port, and depth adjustments.

To create a dowel joint using the Triton, you line it up on the face of each side of the joint and pull the trigger. The machine cuts two 5/16″ diameter holes 1 1/4″ apart. Once the dowels are inserted, the pieces can be glued and clamped together.

How Does the Triton Doweling Joiner Compare to the Domino

Despite the color differences, the Triton and Domino look pretty similar, and both offer a lot of the same features. The most significant difference between the two is that the Domino cuts a slot for a tenon while the Triton cuts two holes for dowels.

Both machines can cut joinery on mitered joints at any angle between 0 and 90-degrees, have dust collection ports, and cut joinery very quickly.

With that said, the Domino is in another league when it comes to the quality of the machine and the accuracy of the joints.

One commonly reported problem with the Triton is the two dowel holes are not always parallel with the face of the piece of wood. This means that the joint will be pulled slightly out of alignment. This can be a deal-breaker for many joints where the faces need to line up. Or prepare to do a lot of cleanup after the face to make them look good.

If you need a tool to make quick joints with absolute precision not being a concern, then the Triton Doweling Joiner will be an acceptable alternative to the Festool Domino.

Biscuit joiners have been around for decades now and are invaluable for maintaining pieces’ alignment during glue-ups. There are dozens of biscuit joiners available and range from $65 to $200+. While the higher-priced joiners offer more durability and accuracy, they all do roughly the same.

Biscuit Joiners work by cutting a narrow oval-shaped groove into your piece of wood. A thin biscuit of wood is then inserted into the groove, and the two pieces of wood are lined up on the biscuit.

This is an excellent tool for keeping the faces of a piece in alignment on large glue-ups like tabletops. Operating biscuit joiners is a breeze, and the tool allows for some wiggle room side to side, so exact alignment isn’t necessary during operation.

How a Biscuit Joiner Compares to the Domino

Despite having similar operations, there is no comparison between the Domino and a biscuit joiner.

A joint created using the domino will add a significant amount of strength to the joint by adding the domino tenons. Whereas the biscuits used by a biscuit joiner add nothing to the strength of the joint and are used only for alignment purposes.

For large tabletop glue-ups where the faces are always edge grain, the difference in joint strength when using the domino versus biscuits is negligible. But for any end grain joinery, the biscuit joiner will not offer anything to reinforce what is otherwise a very weak joint.

If you’re looking for a tool to help align joints during glue-ups but don’t need the additional strength offered by dowels or floating tenons, then a biscuit joiner may be the answer. Luckily, these tools are relatively cheap and can be easily found if you only need them for a project or two.

Biscuit joiners won’t replace a domino, though for any other joinery needs. 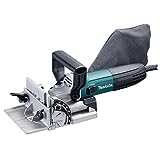 Other Alternatives to Consider

If you are doing a lot of repeatable work, setting up a mortising jig for the router can make for an excellent Festool Domino alternative. You can also easily cut mortises just using an edge guide and either clamping stop blocks for the ends of the mortise or just freehanding it.

I’ve gone this route for many projects, and the results have turned out just fine. The biggest challenge comes when trying to mortise the end of a long board or on angled miter joints.

When choosing a router bit, you can either go with a standard size like a 3/8″ down-cut bit and make your floating tenons fit or go with premade tenons. A number of companies sell premade tenons of various sizes, including Lee Valley or Amazon.

Note that the Lee Valley tenons are offered in more standard sizes while the Amazon tenons fit the Domino. This isn’t a huge deal, but their sizes are in metric, so you may not have a down-cut router bit on hand that will match the size exactly.

Mortising machines seem to have fallen out of favor lately (at least I think they are judging by how many show up on Facebook marketplace these days!). It makes sense though as they take up a lot of room in the shop and can pretty much be replaced by a Domino.

If you’re looking for a sub $200 – $300 option, these machines make cutting mortises a snap on the used market.

The biggest downside with most mortising machines is the size restrictions of the material used on the machine. Cutting mortises into the end grain of boards for floating tenons isn’t possible with most machines, so you’ll be relegated to cutting traditional tenons. There is nothing wrong with this, but this isn’t the best option available if you’re looking for a Festool Domino alternative.

Final Thoughts on Alternatives to the Festool Domino

The domino was, and still is, a groundbreaking woodworking tool that can not be replaced by any single tool. Depending on your workflow, joinery needs, and budget, there are plenty of options to choose from that will help create solid joints or keep your glue-ups in alignment.

Or maybe it’s just time to bite the bullet and pick up a Domino for your shop! That’s certainly the direction I’m leaning!